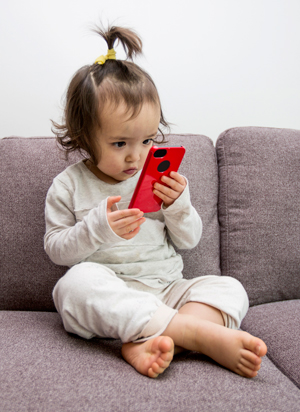 Many babies and toddlers absolutely love playing with touch-screen technology—and it’s no wonder! The touch screen provides instant gratification with its cool images, movements, and sounds appealing to their senses. Many parents are understandably thrilled with this interactive technology because they’ve heard (mostly through media ads) that babies can learn letters, numbers, words, and concepts. However, to date there is no research studying a connection between tablets or smartphones and infant learning.

Despite what ads may say, videos that are aimed at very young children do not improve their development. The American Academy of Pediatrics (AAP) advises eliminating screen time for children younger than 2 years completely, linking it to language learning delays. WOW!

Why avoid TV before age 2?  Here’s what we know…

Numerous studies have shown that children learn better from real-life experiences than screen time, especially activities that involve moving and doing. Kids’ brains grow profoundly during the first 3 years of life, with the brain tripling in mass in just the first 12 months. The stimuli children experience during this period profoundly influence brain development. Images on screens behave in ways that differ dramatically from those in the real world.

Imagine a ball in real life and a ball on TV. Infants are developing 3-dimensional vision. The world of the screen exists in 2 dimensions, so the ball is just a flat, shaded circle. If you roll a ball across the floor it proceeds in a single motion, slowing gradually until it stops. If your infant wants to grab a ball in real life he’ll lunge for it, grasp at it, or crawl after it. Infants may stare at the bright colors and motion on a screen, but their brains are incapable of making sense or meaning out of all those bizarre pictures. It takes 2 full years for a baby’s brain to develop to the point where the symbols on a screen come to represent their equivalents in the real world!

Because of this confusion, children up to age 3 learn better from the real world than they do from any screen, especially when it comes to language. They do seem to learn a little more if they’re watching in the company of a person who is talking to them about what they’re seeing, in the same way you would while looking at a picture book.

So sure, babies and toddlers don’t get anything out of watching TV, but if they seem to like it, where’s the harm? If a little TV is what it takes for you to get dinner on the table, isn’t it better for them than, say, starving? Yes, watching TV is better than starving, but it’s worse than not watching TV. Good evidence suggests that screen viewing before age 2 has lasting negative effects on children’s language development, reading skills, short term memory, and increases their chances of becoming overweight or obese as they get older. It also contributes to problems with sleep and attention.

The problem lies not only with what toddlers are doing while they’re watching TV; it’s what they aren’t doing. Facial expressions, tone of voice, and body language between child and parent are important and complex. A toddler learns a lot more from banging pans on the floor while you cook dinner than he does from watching a screen for the same amount of time, because every now and then the 2 of you look at each other.

Just having the TV on in the background, even if “no one is watching it,” is enough to delay language development. Normally a parent speaks about 940 words per hour when a toddler is around. With the television on, that number falls by 770! Fewer words means less learning.

After age 2 things change, at least somewhat. During the preschool years some children do learn some skills from educational TV. Well-designed shows can teach kids literacy, math, science, problem-solving, and prosocial behavior.

You can’t replace the actual experience of your child physically engaging the world through play. Did you know… eye-hand coordination, eye-foot coordination, and balance all develop during the preschool years.  Activities like running, dancing, freeze tag, riding a tricycle, and climbing are an important part of your growing child’s development. Don’t think of it as exercising, but as ACTIVE PLAY!

If your child is 2 or older, learn how to make a Family Media Use Plan to set healthy TV and screen habits.

Source:  All information was taken directly from the AAP site www.healthychildren.org.