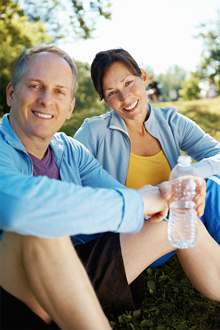 In 2004, the Governor launched the HealthySD program. I was very excited to hear that the state was going to give it’s employees incentives to get healthier.

As an overweight, middle-aged woman, I was concerned about my health, but needed a push to get me started. I was also looking to improve my health, because I wanted to live long enough to see my grandchildren and to be able to actively play with them. So, on February 3, 2004 I rejoined Weight Watchers. On December 7th of the same year, I was back at my goal weight. I continued to lose for awhile, and lost a total of over 90 pounds. I have maintained that loss and will soon celebrate 4 years at goal. I started out walking for exercise, and then last year I bought a hybrid bicycle. In 2007, I rode my bike over 750 miles. This year I continue to walk or ride my bike to stay fit. I am proud to say that at 56 years of age, I take no medication of any kind. And, in December of 2007, I got to be grandma for the first time. Thank you, HealthySD, for your continued efforts to keep the employees of state government, healthier.

I have lost 65 pounds in one year. After trying weight loss drugs and fad diets I discovered the secret to losing weight. Eat less and move more. All I had to do was watch what I was eating and increase my daily exercise. The pedometer was really great for me too because it helped me challenge myself to get more steps.

A year ago this October I was overweight and was diagnosed with Type II Diabetes. I stopped eating at fast food restaurants and cut out sugar, increased my fruits, veggies and exercise. In one year I lost over 48 lbs I am now at 162 lbs. I can ride my mountain bike more than 30 miles in the Black Hills and a lot of the younger guys can’t even keep up with me on the hills. The down side I had to buy a whole new wardrobe.

Scott recently changed his eating habits. He had been working three jobs 7 days a week and drinking up to 18 cans of pop per day. Due to all of the caffeine and sugar, Scott starting having trouble sleeping, he was down to 2 ½ hours of sleep per night before he decided to make a change. Scott was motivated to change because he was diagnosed with diabetes and high cholesterol. He was also tired of feeling like his body was running 90mph due to the stress from work and from drinking so much pop. Currently, Scott drinks 5 cans of diet pop per day, has quit one of his jobs and reduced the amount of stress in his life dramatically. He feels better and has brought his diabetes under control through his lifestyle change.

Laura and Derek decided to do a diet and lifestyle makeover together. They began a worksite wellness program in February and started exercising and eating more fruits and vegetables. So far, Laura has lost 40 pounds and Derek has lost 15 pounds. They were motivated to change after listening to speakers on the risks of disease that are caused by being overweight. Laura and Derek did not want to get these diseases or conditions and decided to change their lifestyles. Laura believes that one of the keys to her weight loss success was drinking less pop.

I had difficulty getting enough fruit and vegetables in my diet so one of my goals for this year is to add one fruit or vegetable to every meal. In addition to this I spend the extra money at the grocery store to buy vegetables that are already cut up and ready to eat.

Tell us how you have changed your eating and physical activity habits.

Send us an email (doh.info@state.sd.us) with HealthySD Success Stories – Adults in the subject line. Selected stories will be printed with just your first name and town listed.